My favorite Pokemon is Shinx (and evolution line), so it makes sense that my favorite shiny Pokemon is:

Sure, it's common in PL, but I love it, maybe too much. I love Sh.Shinx so much I'm collecting them.
Don't believe me, look at my gallery --> https://www.pokemonlegends.com/user?id=768809.
Adorable too. 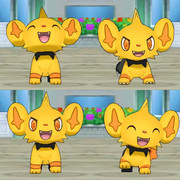 i just love its color when its shiny

My favorite Pokemon is Mega Shiny Charizard X . Neither for it's power nor for its appearance, just because of its Nature . He's Adamant ,he's powerful and thing I liked the most is:- He does not attack his opponents weaker than him. I love it so much that i spend much money to buy a Gold Charmander.Remember the episode when Team Rocket Jessy stole some pokemons from somewhere and one of them was Charizard. She instructed Charizard to use Dig and Iron Tail which isn't possible for a fire-type pokemon to do so. I am a great admirer of shiny charizard. For me getting a Shiny Charzard of my own is just like heaven's fallen on earth.
Hence, I want to say Charizard IS the best shiny in Pokemon World.

My favorite shiny pokemon is Shiny Flygon, I just love its blue color of its horn and the blue stipes of its tail

Not sure about the time but my favorite whould be Charizard,

because ever since Charizard is my favorite
Top

My favorite shiny is the Shiny Espurr, because it has very nice features as well as a pretty nice color. It is so cute.
Top

My favorite shiny is emboar because looks badass
Top

My favorite shiny is Zoroark, purple looks so awesome on that pokemon, its a pokemon that I really really want.
Top
Post Reply
200 posts