NOTE: I'll try to make it a complete guide as much as I can/know and I also want to remind you that I'm not an expert/pro when talking about PVP battles on Pokemon-Legends, but I can give you a few tips on getting strong Pokemons (Not strategies)

Hello there and welcome to the ''Tournament/League guide''!

What are the tournaments?
Tournament is an event organized by the system where players fight against each other, until there is only one winner. The winner can claim the reward announced with red letters at the beginning of the tournament on the ''Player-Chat'' only.
The reward is always a Shiny Pokemon but we will look into them later on.
The tournaments do have restrictions, such like:


When does a Tournament start?
The tournaments/Leagues are auto announced by the system on the ''Player-Chat'' (With red letters) and this will happen 10 minutes before the time is o'clock. There is a Tournament hourly from 00:00 till 24:00. It means there are 24 tournaments held everyday.
NOTE: You can check server time by doing the following command on the 'Player-Chat': /time

As mentioned before, the messages will start to appear 10 minutes before the tournament starts, giving you time to: Where are the Tournament houses located at?
There are 5 Tournaments houses at the moment on Pokemon Legends world aka Orden. Consider that some of those tournaments could find place far away and to reach them you might need to complete some quests and/or continue with the story line.

Tournamens location and level restriction:
1st. Tournament House is at Bluegum Town (1st. town in the game) Pokemons from level 1-20 can enter and remember that after you win 5 Prizes, the system will not allow you to enter here anymore. 2nd. Tournament House is at Darlinghurst Town (2nd. town in the game) Pokemons from level 21-40 can enter (No prize limit). 3rd. Tournament House is at Eastbourne shore, all the way south from Easbourne Town (5th. town in the game) Pokemons from level 41-60 can enter (No prize limit). 4th. Tournament House is at Wildhaven Town (10th. town in the game) Pokemons from level 61-80 can enter (No prize limit). 5th. Tournament House is at Grayview City (12th. City in the game) Pokemons from level 81-100 can enter (No prize limit) 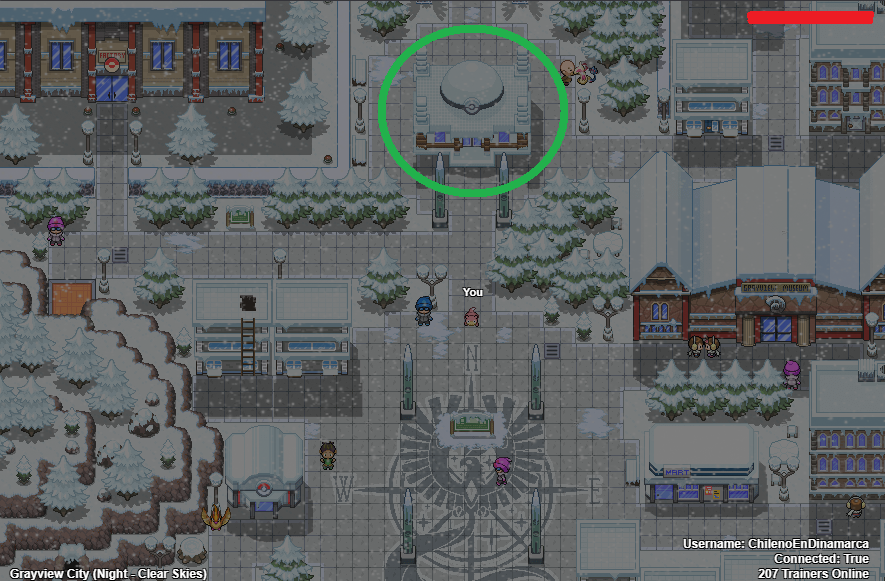 2.- Prizes and how/where to claim them.

What can I win?
Each tournament will have only 1 winner and as mentioned some lines back, the prizes are always a Shiny Pokemon. Those Pokemons can also be found in the wild grass as shinny, some harder than others.

Here is the list of what you can win:
Starters League After 5 prizes the system will not allow you to enter here anymore:

How/Where do I claim my reward?
If you won a tournament (not just a battle) and you want to claim your reward, you must wait till the system mention you as the winner of the current tournament on the ''Player chat'' with red letters.

NOTE: If you leave the Arena right after you defeated your oponent and with out having the system mentioned you, no rewards will be given to any of the participants and the prize will be lost. 3.- What to do if the Game or an User is bugged at the Tournament?

As we all know, the game is not finished yet, and that is the reason for why your game might crash or it loads forever. There are many different moments when your game is bugged/crashed:


At the very start
There are two methods to know if you are bugged or not:
If you can find the red text where it tells you what the prize is you are bugged and you should leave the tournament, it will not start a fight no matter what and you will only waste your and the other user's time.
Some times it will show you the prize but the system will not give you an opponent. That means another user is bugged. What to do? Well, you can wait until there are less participants and from there you along the other users can find out who is the bugged one.

In the middle of a battle
After you win your first battle it should say that ''you are through the next round'' (This message is important to acquire, because you need at least 1 official win to claim the prize from the tournament.)
Some times, the game crashed on the final battle, and the system will not put you or your opponent into battle against each other. What you both can do is to manually fight against each other (Just click on your opponent and then click the button ''Battle'')
This method is a little risky, because normally the system, when it puts you on battle, will auto heal your team. When Manually battling, your opponents and your pokemons will not heal and they will remain as how they ended the last battle.

Sometimes you will be choosing a move and nothing happens. It could be bacause of 2 reasons:
1.- Your opponent leaved the Arena or hes/her connection was not stable. (Same could happen to you)
2.- Or the game crashed for you and/or your opponent and the way to know if you lose or won, without being bugged is that the system will say: ''you are through the next round'' If you lose you will know because when battling it will say that you were to slow to choose a move and it is considered as a lose.

NOTE: Sometimes helpful to refresh your screen before the tournament actually begins (like when they are standing next to the lady to go to the arena. Battles in which everyone refreshes beforehand seem to fare better!!

NOTE: Here I'll not talk about strategies, just how 1 Pokemon can become/could be stronger.

Caputure, breed or buy Pokemons with the following characteristics and train them to get stronger:

Right Nature: Having the right nature for each pokemon helps a lot!
Right ability: This should help also alot, but here I'll say it can/can not be a right ability.
High IVs: IVs can not be modified. But the higher the IVs stronger will your pokemon be.
Train Their EVs: EV are points you can add to your Pokemon on different stats (of own choice) to make them stronger
Here is a a guide for the IV and EV-training (Click here)

NOTE EV-train you pokemon when you have the pokemon you think is strong enough and have the right nature, ability and High IVs. It is not necessary to have high IV on all stats, just the stats the specific pokemon needs.

Let's analyze one Pokemon, to understand all the previous Names and where they find place on the pokemon page and remember that each pokemon has its own nature ability, etc, etc. Next image will show an example and it does not mean it has to be that way. Nature: is right.
Ability: is not the best, but is not wrong.
IVs (can not be changed/manipulated): They are pretty decent!
Now I know all that, I should start to EV-train my pokemon.
EV: All the stats are on 0 and points and EV points should be given on the right stats: For basculin is Attack and Speed
NOTE: A pokemon can be build on many different ways, you can ask other players for better info or you can try google ''move-set for (pokemon name here)

If you need a more detailed INFO about ''Strong Pokemons'', you can read Dracofalco's guide: OP Pokemon Guide (Click here) on

That is all for now. I hope it help you guys to understand more about the game and you got new info to make a stronger TEAM. I'll say it again, when PVP'ing there are also Strategies depending on the pokemons you and your opponent are using and that is not the point of this guide.

Nice guide.
By the way, can you tell me any method to win a tourney without full training and owning OP team

Never had a dream come true

Atomous wrote:Nice guide.
By the way, can you tell me any method to win a tourney without full training and owning OP team

That would be an strategy, and as did mention like 2 times that I'll not give strategies to win.

what about masters league?
free melly

If you get the chance, would you mind updating this guide for the Master's League prizes, which are Deino, Flabebe, Happiny, Litwick, Misdrevus, Munchlax, Murkrow, Stunfisk, and Tyanamo, per new location guide (viewtopic.php?f=19&t=15647). Please and thank you!

Don't be afraid to be a Skitty in a world of Meowths.
Sending well wishes to everyone.
Top

Hukora wrote: ↑
Fri Dec 21, 2018 8:12 pm
If you get the chance, would you mind updating this guide for the Master's League prizes, which are Deino, Flabebe, Happiny, Litwick, Misdrevus, Munchlax, Murkrow, Stunfisk, and Tyanamo, per new location guide (viewtopic.php?f=19&t=15647). Please and thank you!