Hi there! FInally a new event came out!! 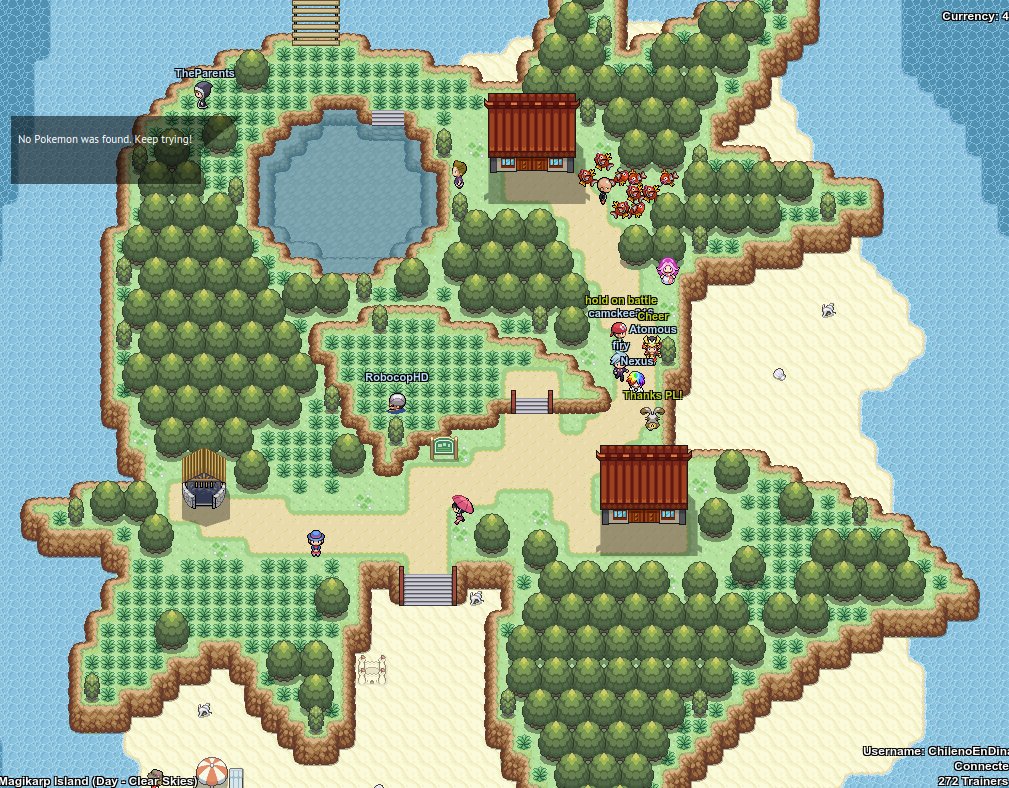 -Start the event by talking with the NPC near the logs on Easterbourne Farmlands. (Picture provided by Staff, click here)
-You will need a seviper enabled for quest and off from your team.
Seviper: Press x behind the tree on route 5: https://imgur.com/a/jMVln. You can also find it at route 7 but is rare pokemon.
-Go back to the event place and show the pokemon to the NPC.
-Catch a Bouffalant for the old Man, enable it for quest and remove it from team. (Don't worry, you will keep your pokemon)
-Now you will have to gather some materials to repair the fence.
-Go to Eastbourne City and talk to one of the construction workers, mention that Jimmy sent you.
-Go back to the Old man.
-Talk to hes Granddaughter (Girl in blue).
-Accept the deal and go to Easbourne Shore and talk to the girl. (I choosed the option ''talk to the magikarps'')

Make happy the Magikarps: https://imgur.com/a/yON4g
1st Magikarp: Talk to it and it will be happier.
2nd Magikarp: Is already happy. You need to have at least an ultraball and 1000c
3rd Magikarp: Bring 10 rock presents. (Rock present are dropped by zubats at the cave on Route one, Full map found at the top)
4th Magikarp: Magikap LVL 200 will battle you, defeat it.
5th Magikarp: Magikap wants to see the other magikarps happy. When all the Magikarps are happy, you can interact with this magikarp to travel to Magikarp isle.

-Let's enter Sara's house and talk to Sara.
-Follow Sara to the south side of the Isle.
-Kick hoolingan's butt out of Magikarp Island! We want that egg

Hooligan do have: Bouffalant, Tauros, Gyarados, Beedrill and Cinccino LVL 100.
-Enter the southern house and interact with the hooligan.
-Go back to the rach with the Tauros and capture 8 ponytas, enable them for quest and take them off your team.
-Talk to Keri's brother (Read haired NPC) and give him the Ponytas.
-Go back to the Magikarp Island and interact with the egg.
-Talk to Keri.
-Defeat larvestas for ''Solar drops''. Collect 30 of them.
-Go back to Tauro's ranch and talk to the Blue Haired NPC found to the north and give him the Solar drops.
-Use the Pick lock on the Pokeball found in the southern house at the Magikarp Island. Boom! Not going to spoil! ConGratz! It is the only 1 you can get! Good luck!!
-Defeat kakunas and metapos to get ''Fall Pebble'', Go inside the southern house and talk to the NPC with Pink clothes and exchange the Fall Pebbles for Glowing Bait... Use 15 Glowing bait on the egg at the southern side of the isle to get Tirtouga: there is not ''Females in this event, but a new egg will respawn every 24 hours. Good Luck!
-Now let us go to the southern-west NPC and give him Glowing baits... you may fail a few times, but do not worry, Basculin will appear soon or later! Defeat it and it will join your team.
-Go inside the Southern house and interact with the Magikarp poster (Click here). Bring the pokemons:
Beedrill-Butterfree-Gyarados; Enable them for quest and remember to take them of your gallery and team.
-Now we should go outside to the west and we will see Mew at the water well: It teaches Fly moves.
Finish.... hmmmm... ZZzzz... Pay 8mill to the Pink-haired girl on the Island... and Who knows '-')7

What to do now??
1.-As usually, you can shiny hunt non-maps.
2.- You can feed your daily egg for a male Tirouga
3.- You can defeat larvestas and when it is night you can go to the pond to change them for rebirth crystals.
4.- Inside the southern house on the Island, the northern-west NPC will give you Eevee candies, coins, pokeballs and more. (all by random luck)
5.- Same house you also get glowing bait for more tirtouga or Basculins.
6.- The old man's wife at the ranch will give you: 1st day dinner coupon, 2 day pp max, 4 day everstone, 6 day minccino

I do rally appreciate you read my guide and I hope you guys liked it! Good luck every! Have a sweet after summer event!!
ChilenoEnDinamarca
Last edited by ChilenoEnDinamarca on Thu Oct 19, 2017 5:53 pm, edited 6 times in total.

awesome as always chileno
Join me on Discord

ChilenoEnDinamarca wrote: What to do now??
4.- Same house you also get glowing bait for more Axews or Basculins.

The Old Mans Wife exactly stated, " That was a nice time talking to you.. Why don't you come back in a couple of days?" "I might have something for you again."

Basically it has to be in a range of 2-3 days, because she said couple of days, and she will have a another item for you, if she talks about something not related to diners
Top

Emperorite wrote:The Old Mans Wife exactly stated, " That was a nice time talking to you.. Why don't you come back in a couple of days?" "I might have something for you again."

Basically it has to be in a range of 2-3 days, because she said couple of days, and she will have a another item for you, if she talks about something not related to diners

The next couple of days includes tomorrow. Why? Because I started event Yesterday and tomorrow will be my 3th day...

By the way, I hope your guide could help me to answer some questions:
1. Where is the 1st bald guy after we finish the storyline?
2. What is the true question of the ninja in the South house? (Until now,we don't know what his question is

)
3. What is the function of DNA Serums in this event? (I know its normal function but why not potion, diner coupon, or anything else)
Never had a dream come true